I’m here to jump on the “PGP is bad” bandwagon. I recently read “The PGP Problem”, a blog post all about how PGP is an aged, bizarre, yet still incredibly relevant piece of personal identity software. I’m not going to rehash the points that are made in that post. It is a really good post, you should read it if you haven’t – not only because what I’ll write after is an extension of this post, but also because its some great content.

I use PGP semi-regularly. I don’t use it correctly, but I use it as a cool hook in to some of the other work I do in my life. For example, did you know that you can set up Git so that it automatically signs each commit and tag by default? Then when you push up your commits to Github, Github rubber stamps your commit with the wonderful seal of approval - a green verified sticker on each commit, telling the world about how you did the security.

Obviously I’m skipping over the massive security benefits commit signing brings. Git repositories (from large repository sites like Github to even a local file system repository) decouple authentication for submitting commits to a repository from actually generating the commits, allowing for situations where someone with push access to a repository could push up “someone else’s” commits without anyone the wiser. No Git project would work without it - symmetric access to all different versions of a Git repository would destroy the very distributed nature that Git strives for. This very behavior then requires contributers to cryptographically sign their commits - this enforces that no matter how the commit gets handed about, the contributor’s key pair attests that the commit contains the same content it had when originally signed.

I don’t write important enough OSS to warrant me needing to sign every single commit. My most popular project NuVotifier has under 42k downloads over its entire lifetime and is used by Minecraft servers to process network connections from server lists. If that means nothing to you, thats okay. It doesn’t have to. Since I’m the main contributer, I sign each commit. However, does it really matter that I sign each commit? Is someone watching the commit chain for each release, making sure that all of the code is legitimately from me? No. I don’t bother signing the releases, which is how the vast majority of users get NuVotifier. And even if I did, I doubt anyone would even check.

Truth is, I sign my commits because one day I found the PGP key option in my Github settings and I was motivated by each of my commits having the green sticker. It made it look ‘better’. Which hey, in all fairness it was, but I’m not convinced for the scale of the software I write matters.

I’ve seen one project which actually uses Git+PGP in an interesting and effective way. dn42’s registry is authenticated through PGP on Git commits. Commits which modify objects which are maintained by a maintainer with a pgp-fingerprint must be signed with the key with said pgp-fingerprint. It satisfies the security that I describe two paragraphs above and suits dn42’s needs wonderfully - open access to all data within the dn42 registry without needing to trust dn42 to enforce security.

I’ve talked about PGP in a code context this whole time when PGP is obviously much more flexible than code. However, that is the only context which I have really interacted with PGP. PGP is also used for email, however I think it is completely agreeable that modern email in the public eye has pretty much ignored PGP. So really, PGP boils down to signing code.

I said above I don’t use PGP correctly. If I were to be using PGP correctly, I would take web-of-trust far more seriously than just downloading keys off the Internet so that ArchLinux stops complaining about unknown keys when updating. I’m definitely part of the problem here. I mean, who even are these people?! 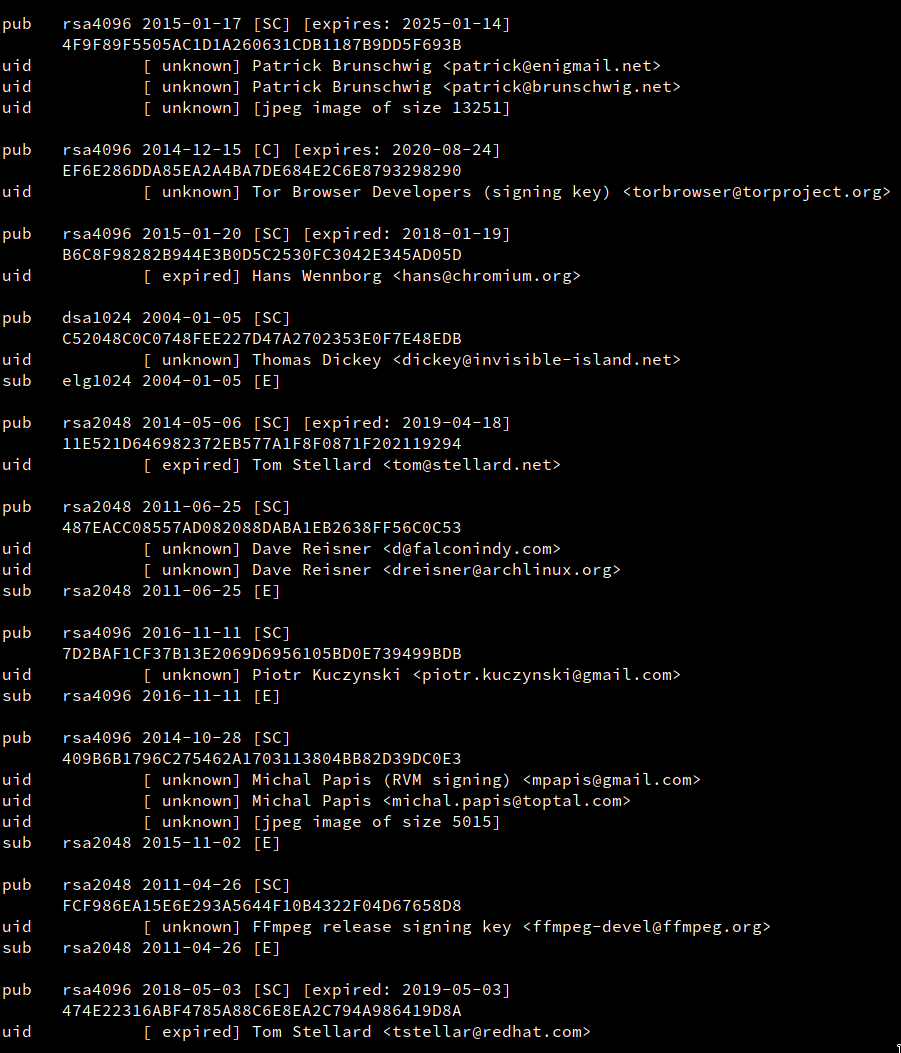 However, how feasible is web-of-trust really? I’m a young person, and I really don’t have time or money to go fly across the country or world to meet the people who sign the packages I depend on. And sure, in a web-of-trust system, I don’t have to do that. But a web-of-trust suggests that the people I trust most would instead have that ability, and the transitive trust through my well trusted acquaintance would give me the ability to then trust other people. The only problem is that my friends who I trust are also young and don’t have the money or time (or the interest!) to go to key signing parties.

The PGP Problem mentions signify, a tool to sign binary blobs with keys. Painfully simple, all it does is sign and verify signatures which is great if all that needs to be done is sign packages with a single signature. Signify rips out all of the bookkeeping of storing keys - all keys are simply stored in files on disk in a base64 encoded format. There is no additional metadata about a key - its just a key. Speaking of a key, here is my key:

I think signify is great for what it is, and while I’m not a signing party fanatic as mentioned above, curating of keys with associated metadata that third party tools can use seems pretty nice. Obviously I’m going to skip by verifying completely who is on the other end of a key, but having a name stapled to a key just feels correct. Maybe this is just PGP normalizing my thinking on the PGP way of doing key management, but I think signify misses this for being a general purpose identity verification tool. That being said, signify never signed up to be a general purpose identity management tool.

Keybase is an interesting service that seems to hit at least two of my problems above - keybase provides key-identity pinning (you can associate many pieces of information with your keybase identity, such as on-line accounts, domain names, associated cryptocurrency public keys) as well as a simple to use web-of-trust ‘following’ system. Keybase’s web-of-trust system seems incredibly similar to PGP’s keysigning party concept, however instead of needing to directly verify identity, I can get away with indirectly verifying identity via a third party service and the public attestation system that Keybase has come up with. Through this gist, I stated that I am Ichbinjoe on Github.

To add to the value of Keybase, Keybase is developing tooling around their identity verification system, introducing products which compete with the likes of Slack with their Keybase teams offering and Google Drive/Dropbox with the public and private mountable folders. Keybase offers more services (and no doubt is making more services to continue to bring identity cryptography to the masses) than what I mentioned, but no solution comes without faults. My big issue with Keybase is that realistically Keybase can’t exist without Keybase. At the end of the day, Keybase is a service which depends on the existence of itself. By simply relying on itself, Keybase is sitting as a third party to what otherwise is a strictly two party system. While Keybase’s (the service) doesn’t need to attest to a third party profile linkage to a Keybase profile (all of those linkages are based on external verification proofs), these linkages are practically only discoverable through Keybase itself - without Keybase’s existence, does the linkage really matter?

All that to say, your profile lives on Keybase. If Keybase stops Keybasing (I can’t figure out how to pay for it!) then it doesn’t really matter anyways.

I could talk about Signal and in general application specific cryptography in some depth, but in short there are two important take-aways as far as I am concerned. First, Signal specifically implements some sort of key rotation. Key rotation is simply best practice - you should do it. However, the above tools make key rotation a manual process. I recently switched my expiring PGP key to a non-expiring PGP key out of fear that the key would expire before I could attest that I was changing my key, so you can see how well that whole key rotation thing went. Key rotation is great, but really needs to be designed into the cryptographic system. Key rotation isn’t designed into signify because its handled at a higher level (see the signify post if you want to learn more). Key rotation in PGP is simply a pain - its a very manual process where you cross sign both the old and new key, revoke the old key, then upload all to a keyserver and wait for the rest of the world to then download said key from the keyserver again. Maybe there is a simpler way to do this - I wouldn’t know. The downside of using applications like Signal is that Signal can only be used to do Signally things - its a messenger at heart, and isn’t good at being used for implementing thing like signing of code.

No, I don’t have some answer to this whole mess we are in. It doesn’t seem like anyone else does either, considering there is no real prominent solution out in the world. I could imagine some sort of federated Keybase being successful with proper existing tool integrations and multiple platform support. Unfortunately I don’t have the time to create such a system. Here’s to hoping someone does.